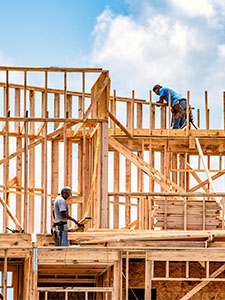 Mortgage rates remained relatively unchanged last week. At the beginning of the week, rates were flat, until the release of the consumer price index (CPI), which sent rates slightly lower. When data suggests an improved economy or hotter inflation, rates typically trend higher. When reports suggest that the economy and inflation are cooling off, rates tend to trend lower. The CPI showed that inflation decelerated more than expected. Then, the underlying bond market showed promising signs as well, which continued rate improvements. However, bonds eventually started losing steam in the middle of the week, leveling out rates once more.

Last week was relatively calm in terms of housing reports. This week, there are several important housing market updates. On Monday, the National Association of Home Builders’ (NAHB) housing market sentiment index will be released. The Federal Open Market Committee (FOMC) will meet Tuesday and Wednesday of this week and release their interest rate decision Wednesday afternoon. Also scheduled for release on Wednesday is the report on existing home sales. New home sales will be released on Friday.

The NAHB housing market sentiment index is based on a survey of home builders’ perceptions on current sales activity, sales expectations for the next six months, and buyer foot traffic.  Any reading above 50 is considered positive. Last month, home builder sentiment dropped to its lowest level in over a year. Falling 5 points from the month before, the index hit a level of 75 in August. Though this reading was still exceedingly positive compared to the 50-point threshold, it was much lower from previous months. Contributing factors include high material prices and limited labor. Prices for certain materials like lumber have fallen drastically from their peaks earlier this year, but it is still difficult for builders to meet the exceedingly high demand for homes with limited numbers of skilled workers.

Existing home sales or resales track the sales of previously constructed homes and make up approximately 90% of residential real estate transactions. In July, existing home sales climbed for the second straight month to reach a seasonally adjusted annual rate of 5.99 million units. The 2% month-over-month climb was largely attributed to the increase in available home inventory. Year-over-year, resales climbed 1.5%. "We see inventory beginning to tick up, which will lessen the intensity of multiple offers," said Lawrence Yun, chief economist of the National Association of REALTORS® (NAR). "Much of the home sales growth is still occurring in the upper-end markets, while the mid- to lower-tier areas aren't seeing as much growth because there are still too few starter homes available."

The Federal Open Market Committee (FOMC) sets the federal funds rate.  The federal funds rate will influence mortgage rates but not set them exactly.  When the Fed raises rates, mortgage rates typically go up.  When the Fed lowers rates, mortgage rates typically go down. After the July meeting, the Fed voted to keep the benchmark interest rate unchanged. For the past several months, many economists have been trying to predict when the Fed will raise rates and taper asset purchases. The latter will likely come sooner. Earlier in the summer, many experts believed that the Fed would make a tapering announcement in September. Now, the likelihood of a tapering announcement this week is just 7%, according to online trading platform Kalshi. “Over the last few weeks, markets have decided that a tapering announcement is highly unlikely to occur at the next meeting,” said Will Arnesen, a former senior research analyst for the Federal Reserve Bank of New York. “That is largely on the basis of Powell’s speech at Jackson Hole, as well as the latest jobs report.” This could be a result of the uptick in COVID cases due to the Delta variant – which puts an added strain on the economy. The Fed’s goal throughout the pandemic has been to support and encourage the economy as much as possible for as long as it’s needed.

The new home sales report tracks the sales of newly constructed homes and accounts for about 10% of total residential real estate transactions.  New home sales inched up 1% in July. Year-over-year, sales fell 27%. New home inventory was at a 6.2% pace, and there were 367,000 new homes on the market in July, the highest level in 13 years

Interest rates have been sitting near historic lows for the past 18 months, but this could change at any upcoming FOMC meeting. If they decide to raise the benchmark interest rate, it’s likely that mortgage rates will follow. If you’re unsure of your current mortgage rate or if you will save by buying a house now, contact us and we would be happy to help.